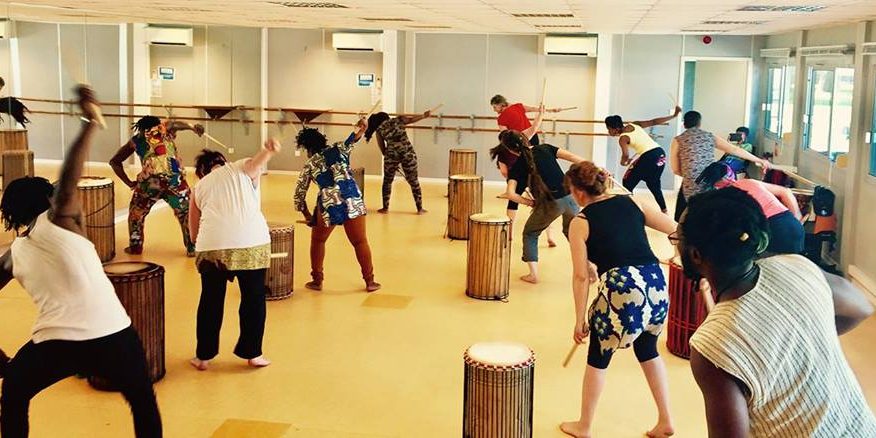 Let’s take our first swirl in Guinea-Conakry and get our Dundun dance on!

If I were to mention the name of Fobéda Keïta, some of you might know what I’m talking about, most, much like myself not that long ago, would raise an eyebrow and give me a quizzical look or a complaisant huh!  Well, let me introduce you to Sir (he hasn’t actually been knighted) Fobéda Keïta.  Writer of renown as well as a politician, he founded in Paris in 1950 the Ballets Africains, a Guinean dance and drums troupe.

He is the sole reason Guinean culture started spreading its wings in Europe. The dance company was made of an eclectic mix of artists, dancers, musicians and drummers from all over Guinea. They danced to the rhythm of their country, following the melodic tempo of their homeland as the musicians skilfully played their traditional instrument such as the Mandingo flute, the kora, the balafon or the dundun…

It was Séku Touré who helped them get their independence in 1958 but long before him, in colonial ti

mes, Samory Touré, a great Mandingo warrior, fought the advancing French troops for almost 10 years before he was defeated in 1898. Nowadays and since 2010, it’s President Alpha Condé who runs the country.

The Malian Empire founded by Soundita Keïta in the 13th century and which lasted until the 16th, stretches out from the dunes of the desert to the beaches of the Atlantic Ocean. If such an empire existed today it would consist of Burkina Faso, Côte d’Ivoire, Gambia, Guinea-Bissau, Guinea-Conakry, Mali, Mauritania and Senegal.

Back in the days

As the Fula people (Peuls) kept flooding in, the Baga people didn’t have any other choice but to flee the region, they left Fouta Djallon and found refuge in southern Guinea.

In the Baga culture, w

omen play an important role when it comes to decision-making but before they can take their full place among their people, they have to go through a ritual of initiation into adulthood. It is during that ceremony that the young girls dance to the rhythm of the dundun. Rhythms, they, themselves, create by beating the instrument. An instrument sculpted in the wood and made in the image of a woman.

Hence started the Dundun dance we know today, thanks to the wonderful work of the Ballets Africains.

The dance itself is made of several rhythms: the koukou, the yolé or more traditionally the tiriba. For the Baga people, the tririba is played to celebrate the end of the ritual. When the girl has become a woman and she can join her mother and finally dance with her as an equal. Nowadays, men and women equally perform the dance.

I met the artist and dancer Fanta Dembelé during another workshop in Nantes this time. She had invited her dear friend Sékouba Condé to introduce us to modern dundun dance…and what a magical experience it was.

I did not have the chance this time to record the performance; however I invite you to enjoy here another dundun dance class performed by Sékouba Condé.

Born in Burkina Faso, Fanta comes from a large family of griots. The griots used to be the West African version of a bard, needless to say that she grew up surrounded by musics, chants, art and dance. She followed in her brothers’ footsteps and joined the Mouvements dansants where she made a name for herself. Clearly gifted, she ventured into other dances and mastered dances from the Mandingue region as well as those from the Ivory Coast and Guinea.

It’s Yelemba d’Abidjan who’s going to give her, her big break. She becomes touring all over France and begins to look at teaching. Currently, she lives off both of her passion, dance and teaching and she sometimes take her young son along with her for the ride.

She met Sékouba Condé in Paris, they both worked for a Guinean troupe for 7 years, Fanta danced and Sékouba was on the percussions. In workshops, like the ones I’ve mentioned previously, they feed off each other energy and it is their friendship and professionalism that boost participants and make such events truly inspiring. Today, Fanta dreams of creating a pedagogical centre in Burkina Faso where the arts: dance, music and culture would be at the heart of the educational project and hopes she’ll be able to dance to her very last breath.

“I didn’t choose dance, dance chose me. It’s hard but if the passion is there, you won’t give up. You should never give up” – Fanta Dembélé

A big thank to Fanta and Sékouba; and as for us… I’ll see you soon!