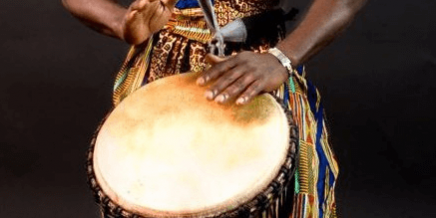 « Nangadef ? », « Mangi fi rek ». Not so long ago, I didn’t know what it meant either. « How are you? », « we’re here » so everything is fine! Well, I don’t know about you but I’m’ here and very happy indeed to be back for another article. Nangadef, Mangi fi rek is Wolof, the most commonly spoken language in Senegal. This is my little linguistic welcome pack to you as I take you to Casamance to dance the Serouba: waaw waaw (“waaw” means “yes” in Wolof) … So, let’s dance!

Where are we going? What are we doing? And what is Serouba?

Don’t fret; you’ll know everything you need to know (well, almost!). Serouba landed in Casamance – a southern region of Senegal on the border with Gambia which was discovered in the 15th century by the Portuguese explorer Dinis Dias – with the arrival of the Sossés population in the 13th century when Soundiata Keïta, the emperor of Mali, reigned. The word Sossé in Wolof means: any person belonging to the Mandingue ethnia (Bambara, Dioula, Malinké, Soussou, etc.…) and therefore coming from the kingdom of Mali. It’s a dance of Mandingue origin, which is now fully integrated in the identity of the Casamance in Senegal. The miracle of the melting pot. I love it!

I’m proud to present to you the three protagonists at the heart of the Serouban rhythm, without them nothing would have happened: i) kutirindin, the shortest one, the one that keeps the rhythm; ii) kutiriba (in the center of the picture), the bass which gives the tempo and iii) sabaroo, the more elongated one, reserved to the soloist who improvises by following the steps of the dancer. Traditionally, the tam-tams are made out of goat’s skin on Vène wood also known as « Palissandre of Senegal », a yellowish brown wood with streaks of purplish brown which are strangely quite coveted (but that’s a whole other matter altogether). The leather straps that hang down along the side of the trunk as well as the pearls don’t just have an ornamental role; they are also here to keep the evil spirits away. 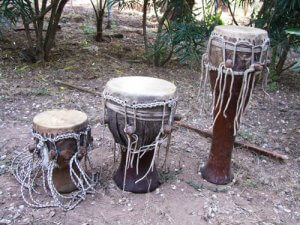 For those already familiar with His Excellency Samory Touré (see the article « Let’s dance … The doundoun dance« ): well, know that during his reign, the warriors went to battle under the beats of the Serouba that motivates! And that the serouba drummers passed on their knowledge to their descendants, a long line of drummers who have since then disappeared but led the way to anyone wishing to learn the art of the Serouba.

Have a look at what modern Serouba is like in the 21th century (click on the picture below): 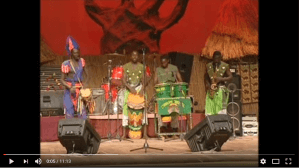 I’d like to thank the Casadimensa association, which I discovered while doing some research online. Check out their website, you won’t regret it: http://www.casadimensa.be/fr. I’ll also soon have the privileged to attend a Serouba dance workshop that will take place in Paris shortly with the choreographer and dancer Alseye Ndao. Don’t fret, I’ll be documenting it all for you guys and telling you all about the groove.

While chatting with Alseye, I learned that the Serouba was more than meet the eyes. It is festive during family gathering such as weddings and baptisms as well as a way to celebrate harvests and to thank Mother Earth. The steps consist of tapping your foot and to elongate your leg and foot in a large circle made of both female and male dancers.

It is also performed during the opening and closing ceremonies of the initiation rites, which mark the transition to adulthood of young men, which can be spread over a period ranging from 8 to 12 months. It is accompanied by spiritual songs when entering the initiation and popular songs when leaving this learning period. Spiritual songs are not made public, they are meant to reveal messages to accompany the future men in their quest for identity and maturity, as, unfortunately, some did not survive the ritual, usually at the circumcision stage. 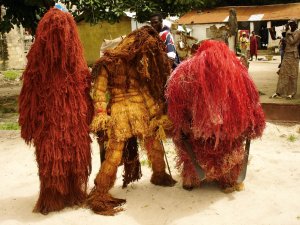 The Kankourang was called upon to ward off the evil eye. The mythical mask was used to identify the troublemakers and punish them accordingly. The person endorsing the role of the kankourang is secretly elected a year before the beginning of the initiation by the elderly council of the village. But is it really a person? … We simple don’t know. The mystery remains… But what is sure is that he upholds the social order and the preservation of the environment, contributing to the fight against deforestation and other natural disasters. It is easily recognizable thanks to the treated fibres of the bark of the elm, of which it is completely covered and whose gradual drying gives it this reddish colour. The Kankourang is armed with two machetes for protection and it is not uncommon that two friends accompany it during its tours: a helping hand is always welcome.

So? Do you fancy a little trip to Casamance? 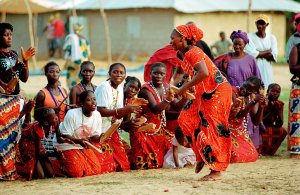 In the meantime…Spotlight on: Tio Percussion

Tio percussion is a dance company, based in Paris (France), which started in 2008 and whose core belief is miscegenation! From the beginning, the founder Mamadou Traoré used his roots in Casamance to spice up his creations by mixing West African music and European ones as well as inspiring women to drum the djembe like the guys. Why not, eh? and it worked. Today, his troupe consists of 9 artists, 6 musicians and 3 dancers amongst who’s our beloved Alsye Ndao (dancer and choreographer).

As you can imagine, it wasn’t smooth sailing, especially when it came to get some recognition both from critics and the mainstream audience. But they made it happened by started out in big festivals like Sam’ Africa (Tio Percussions in the festival Sam’ Africa 2015), the mandingue nights and many more. The key to their success: creativity, a unique style and an incredible energy. Check out their show Yonnbi (meaning “the way”)! But they didn’t stop there; they’re full of ideas. They’re thinking about bringing their show where it all originated from and tour Senegal in 2018 to celebrate International dance day on the 29th of April. Will they? Won’t they? Follow them and you’ll find out.

Last word: « We want to continue our journey and that the company performs more and more on the international stage » – Alseye Ndao.

Many thanks to Alseye Ndao (Tio percussions) for the inspiring chat to be continued! Next stop: the dance workshop in Paris!

Thank you guys for reading me and I’ll see you soon!

Some tips (in French only…Sorry):