Let’s dance…The Jota and the Fandango 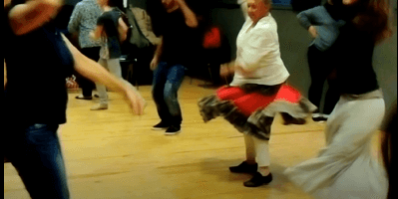 It’s the New Year and I couldn’t start off today without wishing you all the best for the year ahead! Let’s dance has the firm intention to continue to make you dance to crazy rhythms so if your New Year resolution was to get or stay fit: let’s dance! Winter is here. So, what a better way to start off 2018 than with a bit of sun? Take my hand and let’s go to Paradise on earth otherwise known as Mallorca.

The island of Majorca is off of Valencia and Barcelona, in the middle of the Mediterranean Sea, and it is the largest island of the Balearic archipelago, one of Spain’s most treasured jewel of the sea. Unfortunately, as you may know, as of late, the news coming from Spain haven’t been filled with sunshine and roses. I used to live there. Five years. Five wonderful years! A little bit of my heart is still there. What really astounded me when I was there was how devoted they all were to their families. No one is left behind. Family prevails. And it is this mind-set that has allowed them to overcome many crisis. I do hope 2018 will appease their current political crisis.

Let’s got to COMDT!

I believe I’ve already told you about the place where it all started (why don’t you check out my previous articles – click here). The birth of this blog, the beginning of it all, here we are again: Toulouse! This time: the Centre Occitan des Musiques et Danses Traditionnelles (COMDT), roughly translated as the Occitan Centre for traditional music and dance, where I went to take Jota and Fandango lessons with the willingness to discover traditional Catalan dances from the island of Mallorca.

While searching the net, I have learned that the Jota is a traditional Spanish dance dating back from the 12th century which, according to the legend, was invented by an Arab troubadour named Aben Jot. The rumours say that before it spread to the entire country, the Jota was primarily danced in Valencia during funerals. You read correctly: danced during funerals! The customs changed with time and the dance became more festive until it became a way to celebrate Saint John in Catalonia. This three-step dance follows a fast-paced rhythm by skipping and it is often accompanied by guitars, banduras, lutes or drums (depending on the region). In Mallorca, the « Ball de Bot » is a joyful celebration for the farmers who dress up in their finest traditional costumes to perform the dance at the rhythm of castanets and chants. It is truly a magical moment of harmony for all. Though the steps resemble those of the Waltz, the Jota is more similar to the Fandango. Is your interest picked yet? 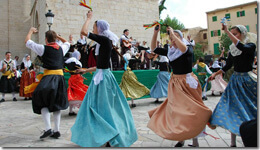 Also a three-step dance, the Fandango may have originated either from Africa (Guinea more specifically) via the slaves deported to Occidental India or from America via the Aztecs. No one seems to agree and the debate rages on. What we know is that it was discovered in the 17th century when the Spaniards brought it back with them from an expedition and made it theirs before introducing it to the rest of Europe. Much like the Jota, the Fandango also follows the rhythm of the guitar and the castanets as well as chants and how could we not mention its traditional costumes. Casanova was known to enjoy the dance:

« It seems improbable to me after such a dance that your female partner could turn you down. The Fandango burst with passion and ignites your senses. The joy I felt when witnessing this bacchanal almost made me utter a cry of folly. » – Casanova, 1767.

I do not possess Casanova’s prose but the dance had a specific effect on me when I discovered a detail of capital importance. My colleagues and I, we found out that no matter the dance, Jota or Fandango, it isn’t the man who leads but the woman. That’s right, for once; it is the woman who’s in charge. The Mallorcan society is actually a matriarch for those of you who might wish for a change of scenery ^_’

Oddly enough, once I knew this, my fears for the upcoming two-day seminar disappeared entirely 😊 Jokes aside, I wouldn’t be doing my job if I didn’t mention that the workshop was attended by quite a few men which, if you’ve read me before, you know is quite rare and quite a shame. We all learned the steps and proved ourselves quite good at it. We learned about the two different musical phrases that characterize these two dances, composed of « llis » and « punt ». The « llis » part is slow and it is the one that links all the different combination called « punt ». In their modern version, the Jota and the Fandango are danced by chaining two successive combinations of « llis » and « punt » before the final figure where couples must meet each other; the nuance between the two dances is purely based on the rhythm which is slower for the Fandango.

In the second and last day of the workshop, we dived into typically Mallorca traditional dances by doing two different types of dances with a fixed choreography: The Fandango Pollenci from Pollenca (North of the island) and the Jota de Peuet (click on the images below): 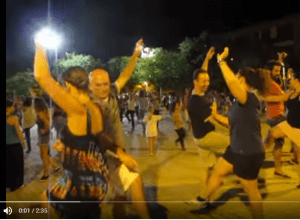 A final debate allowed the confrontation of ideas on the evolution of the balls and the divergences of style in the way to learn the Jota and the Fandango. The Spanish Civil War from 1936 to 1939, followed by the political regime of Franco until 1975, were the cause of great losses of this cultural memory. Fortunately, the recovery initiative limited the loss. However, two schools at the moment are opposed around of an « authentic » transmission or not of these dances. The debate is endless but it highlights the importance of the preservation of this rich cultural heritage. 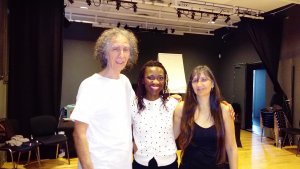 Dancing, debating, etc… I’m starving! Now that you know most everything you need to know about the Jota and the Fandango, let’s have a look at the cuisine from Mallorca. 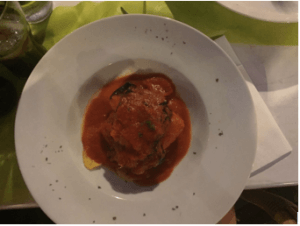 It would be a pity to be in Mallorca and not taste typical dishes of the local cuisine: the Tumbet. That’s what my good friend Ingrid did when she went to spend a few days on the island. On seeing the pictures, my mouth watered. But good old Ingrid did more than just show me pictures, she also brought me the recipe. Tumbet is, to make a long story short, a type of ratatouille though it has layers of potatoes, aubergines and red peppers sliced into thin strips and fried separately in olive oil (made in España of course!). For seasoning: some tomato sauce, garlic and parsley. The advantage of the Tumbet is that it goes perfectly with meat (pork, lamb) or fish (cod, sea bream, hake, depending on the season) or on its own for the vegetarian inclined. Ingrid went for the one with cod. This dish may come from the sixteenth century after the introduction of potato and tomato from the New World (the Americas) in the Mallorca cuisine. One last tip: do NOT peel the aubergines or the peppers before cutting them into thin slices. Otherwise the dish is ruined! You’ve been warned!

A final word: « Go and enjoy this dish in the charming village of Deia that combines gastronomy with typical Mallorcan landscapes! » – Ingrid Kasarjian

A big THANK YOU to the COMDT for sharing some of the Catalan culture through the expression of dance; Ingrid, as soon as I land in Mallorca, I’m ordering a Tumbet!

THANK YOU my dear readers. Don’t hesitate to leave a comment, share and I’ll see you all very soon…